How to Beat a Drug Trafficking Charge in Florida

Drug trafficking laws in Florida are strict and can be confusing to understand. Florida’s drug trafficking statute targets high-level drug traffickers and ensures these drug dealers get severe penalties above and beyond what somebody gets for being a low-level dealer.

A majority of drug trafficking charges are just simple street-level deals that mostly lead to possession charges. The problem is that most people involved in small-time trafficking face drug-dealing charges with unbelievably tough penalties.

What is drug trafficking?

Drug trafficking, as defined by state law, is the possession or otherwise the transportation of any illegal or controlled substance with the intent to distribute or sell. Prosecutors must prove beyond doubt that the person was indeed found in possession of a sufficient amount of the drugs they are being charged with trafficking.

The controlled substances in question may vary from one case to another. However, the most common illegal drugs that may lead to such a charge include marijuana, heroin, cocaine, hydrocodone, and methamphetamine.

How to beat drug trafficking charges 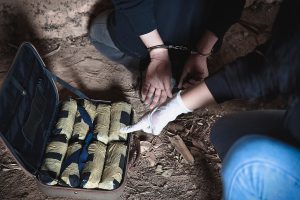 Getting your drug trafficking charges reduced or dismissed is not an easy affair and acting fast on the charges is paramount. If you are charged, you can do several things to increase your odds of avoiding a drug trafficking conviction, so read on for more information.

Understanding your rights before and during your arrest will help you avoid self-incrimination. Remember, you have the right to remain silent and speak to your lawyer if you find questions from law enforcement officers intimidating.

The police are also not allowed to search your property without probable cause to believe you are committing a crime. Any evidence collected through an illegal search may be inadmissible in court, and a skilled defense attorney will ensure it is thrown out.

Remain calm, do not panic

It would be best if you were careful how you carry yourself when interacting with law enforcement. Here are some of ACLU’s guidelines that can be of good use to you.

The consequences of police acting unlawfully are often not immediately apparent. The trick is to act calm, avoid violence and aggression, and record their unlawful conduct if possible.

If the police acted in a way that is against the law, your lawyer might be able to have any evidence they obtained while acting in such a manner dismissed.

Get an attorney to represent you, immediately

Collect as much evidence as you can as early as possible before it is destroyed lost as it is wont to happen with time. Your defense attorney will focus on gathering any relevant evidence that can be crucial to your defense right away.

The use of CIs by police to gather evidence in drug-related cases has recently increased. Law enforcement officers are very keen to keep the identities of their CIs secret, and you can leverage this in your defense.

The Sixth Amendment allows you to confront your accuser in a court of law. Most police will be reluctant to burn their CIs, and some prosecutors would rather negotiate a better deal with you in exchange for not burning the confidential nature of their CIs.

Use the entrapment defense

There are cases where an undercover law enforcement officer is involved in setting up sting operations. Some people might feel set up to commit a crime that they may not otherwise have committed.

Such a person can argue in court that a law enforcement agent or a CI  entrapped them. An experienced drug trafficking defense attorney will help you determine if the entrapment defense is applicable in your case and how you can claim it.

It is crucial to remember, every situation is different, and these defenses may not be the best for your specific case. This is why it is vital to hire a skilled and experienced drug trafficking attorney who will help you throughout the murky process of beating drug trafficking charges in Florida.

How we can help

Drug trafficking charges are pretty common in Florida, and they have very steep penalties. Being charged with drug trafficking, you face up to 25, 30, or even more years behind bars. These charges can also cost you a lot of money and also damage your reputation, family, and livelihood.

Our lawyers at Meltzer & Bell are here to help you take the proper steps to get your charges reduced or ultimately dismissed. Contact us or call us at (561) 557-8686 to schedule your free consultation in Miami, Florida, today.