Under Florida Statutes, residents cannot possess any harmful and toxic substances. Cocaine is one of the illicit drugs that can lead to a person facing serious charges. Cocaine is the third most commonly used drug in Florida behind marijuana and opioids.

If you are facing cocaine possession charges, you should seek the aid of a drug crime attorney. The state strictly enforces drug laws, and Meltzer & Bell, P.A.’s team in Miami, Florida, will work hard to defend you in court. Every case is different, but our lawyers are committed to getting the best outcome possible. Reach out to our firm if you have any questions about cocaine possession charges.

What is a Controlled Substance?

A controlled substance is a drug the government regulates when it comes to its manufacture, possession, or use. In several cases, they are illegal drugs and can have a harmful effect on a person’s health. Possession of illicit drugs can face charges on a local, state, and federal level.

Cocaine is one of the many controlled substances in the United States. In Florida, young adults have the highest rates of cocaine use compared to other age groups. According to SAMHSA, an average of 6.22% of Floridians between the ages of 18 and 25 use cocaine. The rate of use decreases over the age of 26.

The Controlled Substances Act is a federal policy that further regulates drugs, and it created five classifications of controlled substances. While some drugs fall under one of the classifications, people legally can possess them with a prescription for medicinal use. In Florida, the Controlled Substances Bill sets prescribing limits and mandates the continued education of prescribing drugs.

The Five Schedules of Controlled Substances

The classifications of controlled substances are called schedules. The first schedule consists of drugs that are the most detrimental to a person’s well-being. The categories are:

What Schedule is Cocaine Under?

Under the Controlled Substances Act, cocaine is a schedule II drug. The law prohibits the distribution and use of cocaine by the general public. One licit use involves cocaine hydrochloride (4% and 10%) solution. The solution is in a topical local anesthetic for the upper respiratory tract, but the United States rarely uses the solution medically.

The law defines two types of cocaine possession. One of them is actual possession of drugs. Actual possession is when authorities find cocaine on your person or close enough within reach. No one else had equal access to the illicit substance, and the defendant is considered in control when surrounded by these circumstances.

The other form is constructive possession of drugs, and it is when a police officer believes a person or multiple people had knowledge and access to cocaine. An example would be if you were at a friend’s house, and the police find some substance during a search warrant. Even cocaine in the glove compartment of a car can lead to constructive possession.

The Penalties of Cocaine Possession Charges in Florida 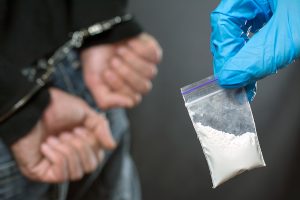 In Miami, Florida, the possession of cocaine is a third-degree felony. A person can face a maximum of five years in prison and get charged a fine of up to $5,000. They may get probation for up to five years as well. Someone could get minimum penalties, such as community service and a substance abuse evaluation.

Cocaine possession charges also can result in the consequences of a suspended driver’s license, loss of employment, and loss of educational opportunities. A license suspension can last up to two years. If you are not a United States citizen, you may face deportation as a penalty.

A person may get charged for drug trafficking in Miami if they get caught with 28 grams or more of cocaine. A drug trafficking charge can carry harsher sentences depending on how much of the substance the person had. The law considers it a first-degree felony.

For a court to convict a person, the defendant needs to have had actual or constructive possession of a substance. The prosecution has to establish that the specific drug was cocaine. Then, they need to show how the defendant was aware that the illegal drug was on their property.

Sometimes, the defendant did not have any knowledge of the presence of cocaine. A drug crime attorney can help you avoid the penalties of a cocaine possession charge. The team at Meltzer & Bell, P.A. is here to assist you with your legal case and protect your future.

Our lawyers can help you navigate the legal system and use several strategies to minimize charges or even get them dropped entirely. One common defense is proving the prosecution did not obtain their main piece of evidence legally. Our team collectively has decades of experience and knows how to handle these issues seriously.

Our firm has four main offices across Florida, including Miami. Cocaine possession charges get processed quickly, so you should seek legal representation as soon as possible. Contact us today at (305) 874-0279 for a free case evaluation.