Escape Your Miami Meth Manufacturing Charges With an Experienced Attorney

If you’re facing meth manufacturing charges, it’s critical that you hire an experienced Miami drug manufacturing attorney. There are various preventive efforts and strict laws regarding this drug, and if you’re convicted, you’ll face harsh penalties and suffer long-lasting consequences.

We understand how frightening and overwhelming facing a federal indictment for meth manufacturing charges is for you, your family, and your affiliates. This is why we represent you aggressively and stop at nothing to make sure we squash the criminal charges against you.

The prosecution has to prove beyond reasonable doubt that you’re guilty, and we’re ready to face them from the start of the case until the end. If you or a loved one has been convicted for meth manufacturing charges in Miami, here’s everything you need to know.

What Is the Basis for Meth Manufacturing Charges?

Meth manufacturing is strictly prohibited in the U.S. The only people allowed to manufacture this drug are those that have been approved and licensed by the federal and state authorities.

Drug manufacturing happens when a person engages in any production stage for illicit drugs. This means that if you’re found in possession of the drug or have the intent to manufacture meth, you can still be charged. Meth manufacturing also involves possessing or selling the specialized equipment and chemicals used to manufacture the drug.

Under the Florida Drug Abuse Prevention and Control Act, labeling, packaging, or repackaging meth is also considered unlawful. The law, however, distinguishes between the manufacture, sale, and delivery of small amounts of meth and knowingly manufacturing, buying, selling, or delivering a specified amount of methamphetamine into the state.

A Quick Overview of the Laws That Regulate Meth

Methamphetamine is a strong synthetic stimulant that impacts the central nervous system. When users abuse it, they become addicted and debilitated. This drug is also referred to as meth, glass, ice, or crystal in the streets.

Meth drug abuse is both a local & international point of concern, and in the U.S., this drug is mostly used in the central, southwest, and west regions. It is a heavily controlled substance and is mainly regulated by 3 laws;

The Controlled Substances Act (C.S.A.) is one of the most important regulations that you should be familiar with. It falls under the 21 United States Code §812 and highlights the laws and regulations regarding controlled substances, including meth, and the penalties you’ll face when you violate this law.

The U.S. congress classifies drugs based on their potential danger & potency, and meth is in Schedule II and Schedule III controlled substances. Injectable liquids that contain this drug are highlighted in 21 U.S.C. §812(c), while all the other meth substances are covered by 21 U.S.C. §812(a)(3).

Since methamphetamine is regulated both locally and globally, it’s covered by the  Convention on Psychotropic Substances, which was part of a U.N. treaty in 1971. Since the U.S. is part of this treaty, this law is also applicable in the nation. This means that Congress must enforce laws that fulfill the obligations of the treaty regarding Meth regulation.

However, the Convention on Psychotropic Substances allows the use of meth for scientific reasons and government-approved medical research.

This convention was held in 1988 and was part of the U.N’s attempt to combat money laundering and international drug trafficking. The U.S. also has a “Kingpin Act” that’s aimed at countering narcotics drug trafficking and all related activities.

What Are the Penalties for Meth Manufacturing Charges in Miami? 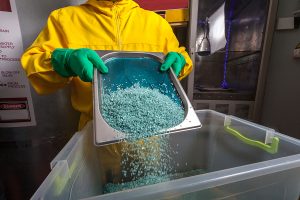 Meth manufacturing penalties in Miami are strict, which is why you should consult an experienced criminal defense attorney as soon as you’re arrested. This offense is considered a felony, and you risk penalties such as;

It’s important to note that the penalties for meth manufacturing in Miami depend on the amount of the drug you were caught with.

For instance, if you’re caught with up to 14 grams of meth or in possession of the chemicals needed to manufacture meth, this is considered a second-degree felony and carries fines of up to $10,000 and a 15-year maximum prison sentence. Renting a room to serve as a meth lab is considered a third-degree felony.

If you’re, however, caught manufacturing meth within 1000 ft of a community recreation facility, public park, education facility, or child care center, the charges are elevated to a first-degree felony.

For you to be convicted, the prosecution has to prove that you were in possession of the chemicals or equipment required to process meth and had the intent to manufacture it. Our experienced legal team has a couple of defense strategies against these charges. We will aggressively question the accuracy of the lab results or even prove that all evidence against you was obtained through improper tactics, including illegal searches.

To reduce your chances of getting convicted, we advise that you seek legal advice from our meth manufacturing attorneys as soon as possible. This will give us enough time to investigate your case and craft a winning defense.

Get in Touch With a Miami Drug Manufacturing Attorney Today!

Fighting drug charges alone can be nerve-wracking. There’s a lot at stake, and getting convicted could result in a long prison term, heavy fines, probation, and even restitution. These penalties also come with long-lasting impacts, such as loss of your driving license, loss of voting rights, and loss of the right to carry firearms. You may also have a hard time getting proper employment after you’re done serving your prison term.

Hiring an experienced Miami drug manufacturing attorney takes a huge load off you and increases your chances of having the charges dropped. Let us fight for you. Contact us today or call us on (305) 874-0279 for a FREE consultation.