Everything You Need to Know About Trespassing Fines

If someone reports you for trespassing, you’ll likely end up in court. But what’s the next step after that? What do Florida State laws dictate about trespassing crimes? Will the courts slap you with misdemeanor or felony charges? Is there an option for paying trespassing fines and walking away, or will you serve time in jail? Well, don’t fret. Here is everything you need to know about trespassing property crimes.

An offender commits a trespassing crime when they wander into a property that they have no right to enter, knowingly. You can also face trespassing charges if you choose to stay on a property after learning that the owners or management prohibit such access. That means that you can access a property with the express permission of the owner but still get slapped with trespassing charges if they order you to leave, and you fail to do so. This also applies to regular house guests who extend their stay at the displeasure of their host. Remember, trespassing prohibition doesn’t have to be on verbal warning. That said, this crime can occur on both public and private properties.

Where Can You Commit Trespassing Crimes?

Generally, trespassing is a minor crime in Florida and your attorney should help you sort it out as soon as possible. However, the crime can escalate into more serious charges depending on the circumstances surrounding the offense. For instance, trespassing into a property with dwelling people makes the crime more serious. It even gets more complicated if you trespass into a property armed with a dangerous weapon or a firearm. The assumption is you’re trying to harm the property’s owner.

Chapter 810 of the Florida Statutes indicates that trespassing charges can emanate from these premises:

Trespassing in a dwelling can happen in a building of any kind, whether permanent or temporary, provided there is a roof over it and people occupy it. The Governor can also designate a dwelling area by issuing a proclamation or an executive order or a proclamation in a state of emergency. In that case, you can trespass on a dwelling that has no roofs or walls around it. This includes a portion or remnant of the designated area. However, sometimes, dwelling also refers to conveyance, which can be mobile or immobile properties.

Offenders can trespass a structure, which includes any type of permanent or permanent building with a roof over it.

Trespassing in a conveyance in a motor vehicle, ship, aircraft, or any vessel. The charges may also extend if the offender steals any part of the conveyance.

Types of Penalties and Fines for Trespassing Charges 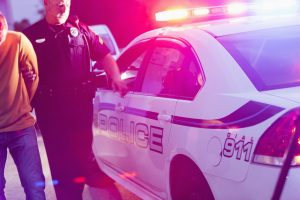 Before we look into various trespassing fines, it’s important to understand how you can get charged in the first place. As noted, you’ll face trespassing charges if you enter a premise or property without express permission from the owner. The warning or authorization for trespass can be in the form of enclosures, legal posting, communication with the offender, or a set-up posting by the property owner.

1. Penalties for Trespassing on a Private Property

The circumstances that amount to trespassing on private property are explicit in  Title XLVI Chapter 810.08(1) of the Florida statute. This includes wandering into the property after ignoring the trespass notice or verbal warning from the owner. Chapter 810.08(2) indicates that trespassing into private property amounts to a second-degree misdemeanor. This can attract a 60-day jail term or a fine not exceeding $500. Sometimes, the court can punish the offender with both the fine and the prison sentence.

However, the charges can escalate to a first-degree misdemeanor if you trespass on private property with occupants inside. In that case, the offense will attract a fine not exceeding $1000 or a one-year jail term, sometimes both.

If you wander into a private property armed with a dangerous weapon such as a firearm, you’ll pay a fine not exceeding $5,000 or serve a jail term of five years.

2. Penalties for Trespassing on Properties Not Designated as Buildings

It is possible to trespass in a property bot designates as a building. In this case, it can be a protected area. Such an offense can attract a jail term of about one year or a fine not exceeding $1000. If the offender hesitates to leave the property even after getting a verbal warning from the management, the offense escalates to a first-degree misdemeanor and attracts the same penalties. That is a one-year jail term or/and a $1000 fine.

3. Penalties for Trespassing on a School Property

Chapter 810.097(2) designates a school as any learning facility that includes a kindergarten, elementary institution, middle school, high school, or secondary school.  Trespassing into a school property in Florida states amounts to a first-degree misdemeanor. The crime can attract a jail term of one year or a fine not exceeding $500. Depending on the severity of the offense, the perpetrator can get both penalties.

4. Penalties for Other Crimes Committed During Trespassing

Chapter 810 of the Florida Statutes indicates that other criminal offenses such as burglary can also happen during trespassing. The prosecution of burglary charges associated with trespassing can happen in three main ways, depending on the severity of the offense. If the offender gets prosecuted under Chapter 810.01(2a-c), they can face up to 30-year imprisonment or a fine not exceeding $15,000. This is a first-degree felony, and it happens when someone gets injured during the burglary.

Get a Lawyer When Facing Trespassing Charges

As you can see, trespassing charges can be quite complicated. Trespassing fines are even more confusing if you don’t understand what the courts are charging you with in the first place. That said, reach out to our Miami office for consultation and representation.