Facing Charges For DUI With Property Damage in Florida

The average DUI incidences in Florida are higher than the national average. Even with stricter regulations – zero-tolerance laws, sobriety checkpoints, harsh penalties such as ignition interlocks, license revocation – to deter drivers from driving under the influence, people still get behind the wheel after downing one, too many.

Causing an accident is usually the last thing on an intoxicated driver’s mind. They all hope they will get home or to their destination without an incident. But those on-the-spur-of-the-moment decisions lead to hundreds of thousands of accidents across the state every year. In this article, we look into the laws and penalties that spring into action when facing charges for DUI with property damage in Florida.

Essentially, a person is guilty of DUI if they’re caught driving while intoxicated. The intoxication could be either from alcohol consumption or abuse of other intoxicating chemical substances that may impair the auditory, visual or mental processes.

If sobriety tests find that you have exceeded the stipulated blood alcohol content (BAC), you are liable for prosecution and punishment. Your blood-alcohol level must be below 0.08 grams per 100 ml of blood or 0.8 grams per 210 liters of breath to pass the sobriety test. Otherwise, if it measures 0.08 or higher, you are guilty of DUI. Moreover, if your breath-alcohol level measures 0.15 or higher and you’re carrying a passenger(s) below 18 years, you’re liable for a harsher punishment.

Penalties for DUI With Property Damage in Florida 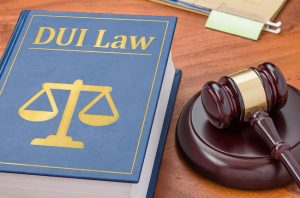 Florida has enhanced penalties for DUI with property damage charges. If you cause an accident driving while intoxicated, leading to property damage, you are charged with a first-degree misdemeanor.

For first-time offenders, the penalties are up to $1000 and imprisonment not exceeding one year. If you had a minor passenger(s) at the time of the accident, and your blood level measures 0.15 or higher, you pay a fine of up to $2000 and not less than $1000. The court also requires the mandatory placement of ignition interlock on all the offender’s vehicles for six consecutive months. Usually, the offender meets the installation costs.

Second offenses usually attract a higher penalty, which is not less than $1000 and up to $2000. If there was a minor passenger, the fine goes up to at least $2000 and not more than $4000. In addition to the fines and jail term, the offender’s car(s) (bought or leased) are fitted with an ignition interlock (at their expense) for at least one year.

If the DUI charge is the third offense within ten years of the second conviction, it’s regarded as a third-degree felony. Third-degree felonies carry even harsher penalties. If convicted, the offender may serve a jail term of up to 5 years and pay a fine of $5000. Besides, the offender’s vehicles must be fitted with ignition interlocks for at least two years at their expense.

For all fourth offenses, the above penalties for third-degree felony apply regardless of when the previous conviction occurred.

Besides the above penalties, DUI offenders are usually placed under a monthly reporting probation. For first offenses, the conviction comes along with up to one year of probation and at least 50 hours of community service. However, some situations can allow you to redeem the community service working hours with a fine of $10 per hour. The circumstances are subject to court approval and may include employment obligations, inconveniencing geographical location, etc. During the probation, the court orders impoundment or immobilization of the vehicle involved in the accident for at least ten days.

For second offenses occurring within five years of the first conviction, the court orders impoundment or immobilization of all defendant’s vehicles for 30 days. This must occur concurrently with license revocation. Similarly, third and subsequent convictions lead to impoundment or immobilization of the defendant’s cars for 90 days, alongside license revocation.

However, the court may lift impoundment or immobilization for various reasons, such as;

Defenses for DUI With Property Damage in Florida

For the prosecution to bring a successful charge against you, they must prove that you were the person driving when the accident happened. If the police arrived after you had exited the vehicle, and there’s no documentation to prove you were the driver, it may be hard for the court to pin you down. In this case, you can assert the wheel witness defense since the court has no evidence to prove otherwise.

Even if the breathalyzer showed an above limit blood alcohol content (BAC), you could challenge the test on specific grounds. For instance, if you have a reason to believe the reading was erroneous, maybe due to the device’s mechanical failure or improper calibration, you can front that defense.

Usually, law enforcers will require the driver to perform specific exercises in addition to the breath test. These are meant to back up evidence that the driver is intoxicated. However, there are instances where one may fail the tests despite not exceeding the BAC limit.

Your attorney can capitalize on this defense, especially if the sobriety tests took place immediately after the accident. They can argue that you were shaken from the accident, which may have affected the balance and coordination tests.

How to Go About DUI Charges?

If you or a loved one has DUI with property damage charges in Florida, the first step is to contact a skilled DUI attorney to evaluate your situation and advice accordingly. At Meltzer & Bell, P.A., we have a track record of successful DUI representation in Miami and Florida. Talk to us today for a free case evaluation and a promise of the best possible representation.