Several Degrees of Separation Between Misdemeanors & Felonies in Florida

Florida organizes its crime levels into degrees with general suggestions for consequences, such as prison time, jail time, fines, and so on. Each crime is labeled either a misdemeanor or a felony, depending upon the severity of the crime and the actions around the crime.

This label is the main determinant of your future and understanding the difference is essential for your defense. Have you, or someone you know, been accused of a misdemeanor or felony crime? Did you know that a felony in one state could a misdemeanor, or even legal, in another state? There are so many questions that deserve answers.

What Is A Misdemeanor?

A misdemeanor is a lower-level crime that may be easily managed when there is no evidence of violence or no real victims, so to speak. Florida basically considers crimes that carry a sentence of less than a year as misdemeanors.

A 2nd Degree Misdemeanor consists of a $500 fine and up to six months in county jail. Disorderly conduct and simple trespassing are excellent examples of the 2nd degree.

A 1st Degree Misdemeanor is the most serious of misdemeanors, and you could spend up to a year in jail and have to pay $1,000 in fine. Vandalism or criminal mischief can cause you to have to pay damages to the victim as well.

A person assigned to jail time will usually not be sent to prison. When you are staying somewhere for a year or less, they will keep you close to where you were tried, at the county jail.

A gross misdemeanor is a crime that walks a thin line somewhere between a serious misdemeanor and a lighter felony. It’s so serious that it should be a felony, but it just doesn’t meet the exact qualifications so a sub-category was created to define these crimes.

Misdemeanors are smaller crimes that either don’t necessarily have a victim, or the victim is vague, for example, in public vandalism.

Some misdemeanors can be reduced or dismissed with the right counsel. For example, probation and rehab may serve as a better punishment for a possession crime, rather than time spent taking up space in jail. Of course, the designation of the crime all depends on the details: intent, actions, and impact.

What Is A Felony? 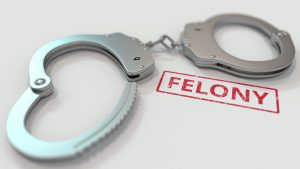 A felony is the most serious of crimes and carries with it a stiff sentence and painful fines. Every crime is organized into a degree that is defined by the punishment it gives. Florida’s felonies are crimes that call for more than a year in prison. There are five degrees.

A 3rd Degree Felony can cost you up to five years in state prison, as the guidelines suggest, and up to a $5,000 fine, plus any ordered restitution. Assault and battery usually fall under the 3rd degree.

A 2nd Degree Felony is much more serious and can get you 15 years and a mandatory $10,000 fine, plus any ordered restitution. Selling marijuana is a great example of a 2nd-degree felony.

A 1st Degree Felony is the most serious formal felony with 30 years in prison and $10,000 in fines, plus any ordered restitution. Murder comes to mind here, as does aggravated battery with serious bodily damage.

Depending on the charge, most people are not getting punishments that fit their crimes. Rehabilitation shouldn’t take decades in prison. But there is always something you can do. Ask for help.

Anyone accused of a crime has the right to choose their own attorney and when a person commits a felony, that direction and guidance is sorely needed and usually appreciated. In truth, the consequences of being found guilty of a felony are beyond measure and extend further than oneself. Prison is much different from jail and the fines get more and more outrageous.

Most felonies are tried in the state court system but, occasionally, the federal courts could take over the prosecution. And the stakes rise even further. You don’t want this to happen.

Did you know that there are crimes, in fact, that supersedes even a 1st-degree felony?

The consequences of a life felony are up to 40 years in prison and a mandatory $15,000 fine. A capital felony can cost a person a lifetime in prison, even the death penalty, without the possibility of parole.

Plenty of people wait on death row for years and years before their name is called, which can be torturous. Many times, a sentence of 40 years can be a death sentence.

Remember, felonies are the more serious crimes that can, without help, bring the world down onto your shoulders.

The consequences for a felony are public punishment and anyone who suffers through the consequences understands the toll that a felony will have on a person’s social life, career direction, and ability to find a home. No matter what the crime was, a felony carries a stigma that repels some of the people who give out jobs, rent apartments, and date.

The key is to work with a great lawyer from the beginning. If it’s too late for that, you can see if you are eligible for expungement.

What Can Be Expunged?

Expungement is different in every state, but it basically means that you can petition the state to seal, or hide, a non-violent misdemeanor on your record from public view. Florida allows this only with dismissed or acquitted cases. If a person has pled, and been found, guilty of a crime, then Florida deems you ineligible for expungement.

A background check may mention any court cases you were involved in, and a potential employer can use that information to determine their decision on whether to hire you. So, if you have dismissed charges, dropped accusations, etc., then contact an attorney to apply for your certificate for eligibility.

Contact us at Meltzer & Bell, P.A. in Miami to schedule your free consultation on your case. We’ll take the next steps with you.