What to Do When You’re Arrested for Federal Drug Charges

If you’re facing federal drug charges, earning your freedom or a lenient judgment depends on the aggressiveness of your defense team. The Drug Enforcement Administration (DEA) has stringent regulations governing the use and distribution of controlled substances, which set equally harsh sentences and fines.

Whether you’re being charged for using, possessing, or distributing controlled drugs, having a skilled defense attorney is essential. In some cases, you may face a mandatory sentence, have your assets confiscated, or even fail to secure bail, depending on the amount of the drugs involved and the crime circumstances. But having an attorney experienced in federal drug charges guarantees a better outcome.

In this article, we offer you insight into what to do when you’re arrested for federal drug charges. Though the first step should be to contact a defense attorney, there are other must-dos that can better your chances of a fair trial. For instance, you always have a right to remain silent when questioned by law enforcers. As much as you may have information to prove your innocence, anything you say can be used against you during the trial, hence the insistence on silence.

Without further ado, let’s kick off the post by highlighting various types of federal drug charges.

Federal drug charges vary depending on the type of offense. Each of the crimes is prosecuted differently, and the penalties vary widely. Some common drug charges under federal law include:

If you are discontented with the ruling, you can appeal to the Circuit Court. Basically, the appeal involves challenging the ruling by pointing errors in the trial that you believe the judges overlooked. In most cases, an appeal has three outcomes – reversal of the conviction, sentence alteration, or request for a new trial. But if you still feel the Circuit Court’s judgment is incorrect, you can appeal further to the Supreme Court.

While it’s possible to get out on bail while the case is ongoing, the court may turn down your bail application if the drugs involved are of a significant amount. This is especially the case where the potential sentence is likely to exceed ten years.

Even where you are denied bail due to the severity of the case, you still stand a chance of a favorable ruling, depending on how well your attorney defends you. But you must cooperate with your attorney answering questions truthfully and providing all the case-related information available. This way, your attorney can use the supporting evidence to expose prosecution errors and fight for case dismissal. Also, providing evidence can lead to a lenient judgment where the allegations are exaggerated.

Like in every other criminal case, the prosecutor bears the burden of proving your guilt beyond a reasonable doubt. Being represented by an experienced defense attorney makes it even harder for the prosecutor to prove your guilt. Thus, providing sufficient information and documents to your attorney is of utmost importance.

What Are the Penalties for Federal Drug Charges?

In federal drug charges, penalties vary depending on the type of drug – cocaine, heroin, marijuana, methamphetamine, etc. – amount involved and the circumstances surrounding the crime. Generally, drugs are classified into five schedules, with each having distinct penalties. For instance, heroin and marijuana fall under schedule one, while cocaine and methamphetamine are in schedule two.

If there were weapons involved, a person was injured or was subjected to potential harm at the time of the offense, the penalties will be stricter. The federal courts will also examine your criminal history before deciding the sentence. First-time offenses usually carry lenient judgments than second, third, or subsequent offenses. 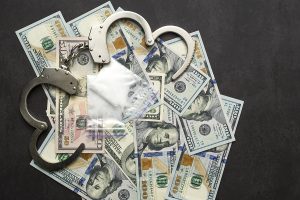 What to Do When You’re Arrested for Federal Drug Charges

Once the trial commences, it’s up to you and your attorney to develop a solid defense to counter the charges. After gathering the necessary evidence, your attorney can exploit various defenses. These include:

Entrapment – If paid snitches entrapped you, then your attorney can front that defense. Usually, you may be guilty of the offense, but then you had legal justification for committing the crime after being compelled by the snitches.

Illegal search – If the federal officers conducted an unlawful search, then that law infringement may be grounds for prosecution evidence dismissal.

Unknowing possession – If the drugs were planted on you or were left on your property by someone else and you didn’t have knowledge of their existence, your attorney can use this as a defense. Besides, the court has a burden to prove that you were in knowing possession of the drug beyond a reasonable doubt.

Erroneous lab analysis – Sometimes, the lab equipment used can have issues, failing to analyze the drug in question accurately. If this is the case, your attorney has a ground for countering the charges.

In summary, facing federal drug charges puts your freedom at a precarious balance. However, with essential evidence and an experienced defense attorney on your side, you can always hope for a favorable outcome.

If you’re yet to find a dependable defense team for you or your loved one, consider entrusting us with your case. Kindly contact us for a free consultation.