Will I Go to Jail for a DUI Arrest in Miami, Florida?

If you’re facing DUI (Driving Under the Influence) charges for the first time, many questions may be flowing through your mind. One question that can burden your conscience and cause anxiety is whether the conviction will result in prison or jail time. The answer depends on your case’s severity and individual circumstances leading to the DUI arrest.

Considering Florida is a DUI zero-tolerance state, the possible consequences of the first DUI offense can be severe. But, at the same time, even a brief stint behind bars can leave lasting implications on your life.

As such, it’s essential to consult with a reliable DUI attorney in Miami for guidance on the correct steps and help to keep the penalties as lenient as possible

What Does DUI Entail in Florida?

DUI is a serious case associated with drinking and driving. Florida State gives the offense a similar legal definition to a Driving While Intoxicated (DWI), and both terms can be used interchangeably.

If you’re pulled over on suspicion that you’re driving while drunk, they may suggest several tests to prove it. Complying isn’t compulsory, but declining could lead to automatic license suspension and vehicle impounding.

The road tests may include a verbal test, a coordination exam, and, most importantly, the breathalyzer. You may have to blow air into this device to ascertain your Breath Alcohol Level (BAL). The device measures your level of impairment and offers legal evidence for the accusation. You may also undergo blood tests to ascertain your Blood Alcohol Content (BAC).

You’re deemed fit to operate a vehicle if you have a BAL or BAC level of between .01 – .07. Going past .08 places you above the legal limit, hence considered driving under the influence. But you should still expect a DUI arrest and charge if you’re at the .08 mark.

To face a DUI conviction under Florida law, the prosecution must prove beyond reasonable doubt that you: 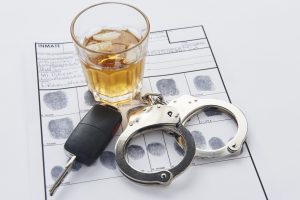 How Does the Judge Determine Jail Time for A First-Time DUI Offense?

A DUI arrest is usually followed by time behind bars until your intoxication level reduces to zero. This should take a few hours or a whole day, depending on how much you’ve been drinking. Police have to get you off the road once they’ve found you impaired behind the wheels.

After a decision is passed on your court case, jail time for your first DUI conviction is at the court’s discretion. Typically, those with no criminal record aren’t incarcerated. However, the incident’s severity will determine the court’s ruling.

If your situation caused property damage, severe injuries, or death, the outcome wouldn’t favor you. The court will consider your character testimony, criminal record, and the situation’s severity to determine your extent of consequence.

For instance, if you blow a .08 and you were taking your child to school, you’ll likely face jail time, even if there was no property damage or accident. This is because the judge and jury will consider the potential for harm pretty serious, hence earning you a jail sentence.

It’s also essential to distinguish between prison time and jail time. Jail is considered a processing facility from where people await trial or serve a shorter time. On the other hand, prison is the destination for those convicted of a felony and serving longer sentences. Thus, it’s implausible to end up in prison for a DUI conviction unless it’s the third or fourth time.

Florida State laws consider driving a privilege, not a right. That’s why you must prove that you’re responsible and knowledgeable enough to be behind the wheels—driving while intoxicated is considered proof that one doesn’t deserve this privilege.

That’s why the state has some of the most onerous penalties in the country for DUI. You can’t seal or expunge this conviction, and it will appear on your record for 75 years. In addition, you can be subjected to a wide range of maximum and minimum penalties. That’s why it’s crucial to have a reliable Miami DUI attorney.

Possible Penalties for a DUI Conviction in Miami

Will I Go to Jail for a DUI? Even if it’s your first offense, you may find yourself facing jail time if you’re convicted. While cases differ and your sentence is determined by your situation’s unique factors, the following general guidelines apply:

If you register a BAC of below .15 or decline a breath test and there’s no crash, you may face maximum confinement of six months and fines between $500 to $1,000. But if you had a minor in the car or clocked higher, the period will be nine months with a fine of between $1,000 to $2,000.

A DUI crash could attract up to 12 months behind bars. Furthermore, the court will suspend your license for at least six months.

If it’s your second DUI offense in less than five years, you’ll spend at least ten days in jail or pay $1,000 to $2,000 in fines. Also, the court can opt for a rehab program instead. But if the period is beyond five years, clocked a BAC under .15 or declined the test, and had no damages, you may spend up to nine months.

Also, a second DUI offense after five years with a BAC of beyond .15 or had a minor in the car, then you may spend up to 12 months in jail, and the fines will range from $2,000 to $4,000. In addition, a second conviction within five years attracts a license suspension of at least five years. But if it’s beyond five years, the suspension will last at least six months.

A Fourth (Or More) DUI Offense

A fourth DUI arrest is considered a felony offense no matter the duration. The possible sentence is up to five years’ confinement in a state prison and convicted felon status. What’s more, the fines are always above $2,000, and you’ll get a permanent license revocation and no eligibility for hardship reinstatement.

With the stringent nature of DUI laws in Florida, you must do everything possible to obtain a favorable case outcome. Contacting a reliable attorney at Meltzer & Bell, P.A. can be your best shot at avoiding the harsh penalties. So, consult with us for free today about your incident, and we’ll protect your rights and help you build a strong defense.